There’s a lot of talk about health around my office, in no small part because I work with a number of clinical providers, several of who still see patients. We’re a small company, with a “family” feel; meaning when a coworker asks about how my weekend was they don’t just want the casual, “it was fine,” answer. They actually want to know. That’s one of the great benefits of being a small company. People care. But there are some disadvantages too.

We’re small, so when there’s a big deadline with a project or proposal, it means there are only so many people do the work. We’re a great team and we work well together and always make the deadline, but that comes with a price. Often that cost is sleep.

But just how important is sleep?

In the book Dreamland by David K. Randall, he says “Whether you realize it or not, how you slept last night probably has a bigger impact on your life than what you decide to eat, how much money you make, or where you live.” In today’s world I’ve often heard people brag about how little sleep that can function on. It’s a sign of commitment to your company; it shows your drive to succeed; and sometimes it is the only way a deadline is going to get met. 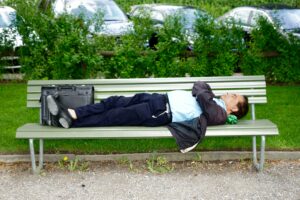 Recently, to meet one such deadline most of our company worked many intense hours, often leaving the office late into the night, sometimes close to sunrise. We slept in when we could the day after putting in such long hours, sometimes not coming into the office until close to noon. But as the days, and then weeks dragged on and our deadline was pushed out, again and again, the long hours began to take their toll. Our talents and abilities were dulled, our thoughts sometimes disappeared mid-sentence and we were more short-tempered and cranky than usual. We made it through and met our deadline with great success, but by the time it was over we were basically zombies.

Once I recovered, I started to put together our lessons learned, which is party of wrapping up every major project or proposal. But the more I thought about it, it seemed like something was missing. All the business aspects lessons had been captured, but what about the physical toll? Overall, the less sleep employees have, the greater the risk factors for not only the company, such as increased costs and errors and accidents, but for the employee themselves. Many start-up companies, as well as larger organizations that have had to cut staff, but are not able to slow down or lessen their work load, also have sleep deprived employees. How do companies deal with this? It turns out the answer was a simple one: companies have begun to implement Fatigue Management Plans. One company, CIRCADIAN®, has been the pioneer in Fatigue Risk Management System (FRMS) tools and implementation consulting for more than 30 years. At present, over half the Fortune 500 rely on CIRCADIAN® for shift schedules, fatigue management, and workforce training for their global 24/7 shiftwork operations. 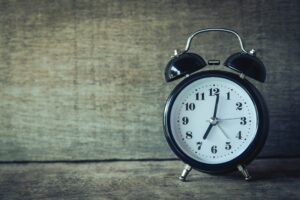 I figured their website was a good place to start my research. But as I dug further into this topic I discovered some very interesting things. First, many of the FRMS were industry specific, such as plans for 24/7 shift workers, or train operators or truck drivers, all of whom have to work either off hours or extended hours for their jobs to function. The second thing I found was although there are many companies who have adopted Fatigue Risk Management Plans, its far from a common practice or policy at present. However, the American College of Occupational and Environmental Medicine article titled Fatigue Risk Management in the Workplace state, “that the ﬁve levels of defense against errors from fatigue include: 1. balance between workload and stafﬁng; 2. shift scheduling; 3. employee fatigue training and sleep disorder management; 4. workplace environment design; and 5. fatigue monitoring and alertness for duty.”

Using these levels of defense as a guideline, MicroHealth has implemented a Sleep Deprivation Awareness program, which helps employees know when they are exhibiting signs of sever fatigue. In addition, our management has, and will continue to shift hours for fatigued employees, allowing them to catch up on lost sleep before returning to the office. As we grow, we will continue to update our policy, tailoring it to the needs of both our small company as well as the physical needs of our employees.